Bank robbers are usually people with a well thought out plan. In the movies, they seem to have everything planned down to the tee meaning that they do all they need to do within a small timeframe to minimize the chances of getting caught. In and out.

Point is, it’s not done on a whim. So, imagine my surprise to find out that a 19-year-old man decided to rob a bank b/c he “wanted to try something new.” Story here. 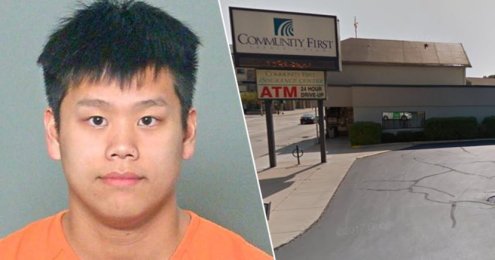 Xengxai Yang, a 19-year-old man, was arrested in Wisconsin for robbing Community First Credit Union on March 15th b/c he “wanted to try something new today,” he said to the police.

According to the article, “…a member of staff at the bank described the robber as a person wearing a mask and black clothing, holding a long gun.” Yang was charged with robbery of a financial institution with a dangerous weapon on March 18th.

The court documents state, “The robber then demanded $10,000 and told the cashiers to put money onto the counter. One staff member described the robber using a zip tie to bind her hands together, and she believed he tied the manager’s hands too.”

Of course, police rushed to the scene and found Yang walking quickly away from the bank wearing black clothing, sunglasses, and a ski mask.

When police searched Yang, they found, “…a rifle in his waistband with bullets in the chamber. Police also found two magazines of ammunition and a box of ammunition in his pants pockets, as well as zip ties in the front pocket of the hoodie Yang was wearing.”

I don’t have to tell you how stupid this was, how much trouble you’re in, and how this could have been avoided… but I’m going to!

How in the hell are you so bored that all you could think to do was rob a bank with a loaded shotgun? How?!

FREEDOM is something that you could have had even now had you chosen to take a nap, take a walk, feed the homeless, hold cute babies, or just watched TV instead of what you decided to do!

There’s no sugar-coating it! You’re in deep, dude. 🤷‍♀️

Who would pay anything to get you out on bond? I know I wouldn’t! You deserve to sit there and think about what you’ve done b/c this was just STUPID!

Then, when the police asked you why you said, “I wanted to try something new?” 😫😑

I want to know how you thought this would end? What did you think would happen?

Usually, I have something to say here that could be useful. Right now, I don’t anything useful to say.

I would talk about how you could have done things differently so that next time could have a more favorable outcome. I got nothing.